An essential fashion accessory, sunglasses are now caring for the environment with the Lyon-based brand Ozed.

Originally from Gap in south-eastern France, Arthur and Lucas have been firm friends since primary school. After graduating, by chance and with a little bit of string-pulling involved (their words, not ours!), they landed jobs in Montbéliard at Ozed, a fledgling company selling glasses made of wood. In 2018, the brand, which had moved to Lyon, found itself in difficulties following a burglary at its storage warehouses in Genay. The two buddies, aged 27 and 25 at the time, decided to try to save the company from going bust. For one symbolic euro, Arthur, a trained optician and designer, found himself at the head of Ozed, in partnership with Lucas, who was in charge of sales.

In 2020, after selling the remaining stock, the pair ran a successful crowdfunding campaign, which enabled them to release their first wooden and metal frame, handmade by themselves. Since then, an average of 6500 pairs (each one unique) are produced at their workshop in Oyonnax each year. Of the 80 production stages involved in making a pair of glasses, almost two thirds are done by hand, including polishing and assembly. This means that no two products are the same.

The materials used are bio-sourced, mostly in Europe. They include wood from environmentally managed forests (French walnut, German maple, and Argentinian rosewood and sandalwood), recycled surgical metals and bio-acetate, a new polymer made with cotton fibres and wood.

Aware that their efforts will never be enough to fully compensate for the environmental footprint of their business, Arthur and Lucas began contributing to Eco Tree, a forest investment start-up, at the beginning of the year. This means that each frame sold funds the planting of a tree in a French forest, near Clermont-Ferrand. Do you want to protect your eyes and the planet at the same time? If so, then you’re in luck, because Ozed’s spring-summer collection has just been released. A wood-acetate model will set you back €109, while the 100%-wood version costs €189.

If you want to try on a pair, make your way to the Village des Créateurs. 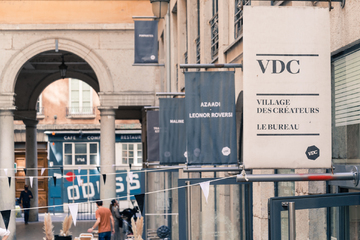 Creators' village of the passage Thiaffait