The 17th edition of the Lyon BD festival is returning to the streets of Lyon and the metropolitan area from the 10th to the 12th of June. With the fstival around the corner, we wanted to take a close look back at the long love story between the people of Lyon and comics.

It is a little-known fact that Lyon, a “city of images”, has played an important role in the history of comics. Between the 1940s and 80s, the Capital of the Gauls was also the capital of the ‘petit format’, small comic books that were sold at a cheap price. At the time, the publisher Pierre Mouchot printed ‘Fantax’ and ‘Big-Bill le Casseur’, while the publisher Les Remparts imported some of the most well-known comic heroes from America. There was also Imperia, one of the most iconic French publishers of the ‘petit format’, and Lug (‘Tex’, ‘Blek le Roc’, etc.), which introduced the Marvel superheroes to France. Comic book history is a pet subject of Nicolas Piccato, the new director of the Lyon BD Festival. In less than two decades, the event has become one of the largest gatherings of its kind in France, drawing its success from the city’s deep connection with comics. Save the date: 10 to 12 June.

The story of comics in Lyon

“Visual arts are part of the culture of Lyon, with the Museum of Printing and Graphic Communication, the city’s textiles... All these forms of local culture have contributed to the growth of comics in Lyon,” explains Nicolas Piccato. “The comics ecosystem is strong, in particular surrounding the Émile Cohl and Condé art and design schools, and the festival will be making its contribution as it moves to the former Collège Truffaut site.” The project, named the ‘Collège Graphique’, will see the festival’s teams, a “third place”, and a workshop with more than twenty workstations dedicated to young authors, moving into the renovated educational establishment on the slopes of Croix-Rousse hill. The site, which is set to be completed in early 2023, should make Lyon the largest centre of comic book creation in Europe!

In the meantime, among the iconic venues for the ninth art already present between the Rhône and Saône, there is the legendary book shop ‘Expérience’, created in 1973 by Adrienne Krikorian. Then there is ‘Momie’ and ‘Côté Manga’, which both specialise in manga, as well as the aptly named ‘Comics Zone’, which is a magnet for comic book nerds, BéDétik, which is run by a former history teacher and comic book fan, ‘La BD’ in the Croix-Rousse, created in 2002, and ‘La 9ème bulle’, where you can find limited-edition prints. And not to forget ‘Expérience Bis’ in Villeurbanne.

If you prefer borrowing to buying, then the Lyon municipal library has a collection of more than 15,000 comic book albums. It is the perfect place to swot up before attending one of the sessions run by the association ‘BD Bagarre’, which organises a monthly (give or take) evening of “quality debates, good humour and bad faith” based on a comic book. The next clash is set to happen at the Lyon BD Festival!

Comics in the heart of the city

For its 17th edition, the Lyon BD Festival is inviting several big names in contemporary comic art, including Ralf König of Germany, who is known for his characters Conrad and Paul, a gay couple living in Cologne, and Nuria Tamarit of Spain, the artist behind some excellent albums, such as ‘Giantess’, as well as the poster for the 2022 festival. From Lyon, there will be Aurélie Neyret (whose series ‘Les Carnets de Cerise’ (“Cici’s Journal”) has been a huge success), Théo Grosjean and Chloé Cruchaudet, who we will talk about a little bit further on. 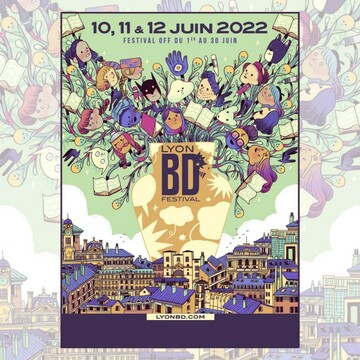 27-year-old Théo Grosjean from Lyon is the author of ‘L’Homme le plus flippé du monde’, which is based on his personal fears and anxieties, told with self-deprecation and perceptiveness. The result? Two superb graphic novels and an animated series for French channel Canal+ : Flippé.

Many fans discovered Chloé Cruchaudet through her excellent comic book ‘Mauvais Genre’. With Céleste, she focuses on the character Céleste Albaret, the housekeeper and secretary of Marcel Proust until his death in 1922.

Céleste : Bien sûr, monsieur Proust by Chloé Cruchaudet, to be released on 15 June, published by Soleil, 17,95 €.

Leïla works at an aquarium but feels stifled. So, she moves to Brittany to follow the tracks of her life, her history, closer to the sea and the whales. The drawings by Elléa Bird recount the upheavals of her life with subtlety and poetry.

What does Grâce like doing? Getting up to mischief and sending gender stereotypes in fairy tales packing! Her creator, Isabelle Maroger gives this character all the verve she deserves. And there’s good news: the second volume is coming out soon!

The queen of offbeat humour

Author of cult albums for children and adults, Anouk Ricard is a master of subtle, offbeat humour! We thoroughly enjoyed rediscovering the antics of Anna and her friends with the publication of a complete collection of the Anna and Froga.

The Jouvray brothers are well-known on Lyon’s comics scene. Jérôme draws and Olivier writes. Not to forget Anne-Claire Jouvray, the talented colourist. You can (re)discover their taciturn cowboy character with the release of the complete collection of Lincoln.

Lincoln, the complete collection 1-3 and 4-6, by Olivier, Jérôme and Anne-Claire Jouvray, published by Paquet, 25 € each.

Aude Mermilliod has deftly adapted ‘Le Chœur des femmes’, a novel by Martin Winckler. The story follows the character Jean Atwood, an intern in a women’s health department who really wants to practise surgery. However, there she discovers the importance of listening and teaching.

With Ruptures, Aloÿse Mendoza gives women a platform: they tell us about their separations (from lovers and
friends, as well as following a move, or a loss). This graphic novel is published by Lapin, based in Villeurbanne. 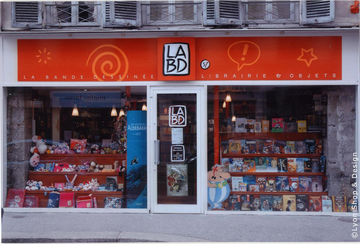