Out and about A journey in the metropolitan area

Villeurbanne is sometimes referred to as “Lyon’s 10th district”. However, this vibrant town, which was named ‘French capital of Culture 2022’, is well worth a visit on its own merits.

Villeurbanne was originally a village. Its name actually comes from the Latin Villa Urbana and a farm dating back to Roman times. In the nineteenth century, industrialists moved here with their factories and changed the face of the town for good. From the magnificent, utopian architectural complex of Les Gratte-ciel, designed to cope with demographic growth, to the chimney of a former factory at the Parc du Centre that was transformed into an artwork by the artist Felice Varini, and the magnificent hydroelectric plant of Cusset, which was built on Jonage canal in the late nineteenth century, the town’s industrial past is everywhere you look. This heritage is now shown off in its best light, along-side an extremely rich cultural fabric.

The Théâtre National Populaire (TNP), a major centre for drama in France, which stands proudly opposite the Hôtel de Ville (town hall), has worked to make theatre accessible to all since its creation. Villeurbanne is also home to the Transbordeur, a venue that was inaugurated in 1989 with a concert by New Order (no less!), as well as the Institut d’Art Contemporain (IAC), housed in a former school, Pôle Pixel, a business centre for creative and audiovisual enter-prises, located at the Grands Moulins former industrial wasteland, Les Ateliers Frappaz, a national centre for street arts, and Urdla, an international centre for printing and publishing...

With all this, it’s no surprise that Villeurbanne was named ‘French Capital of Culture 2022’. As if that wasn’t enough, Villeurbanne has a reputation in the world of sports, as the stronghold of the legendary basketball club Asvel, which is managed by four-time NBA champion Tony Parker, and nature lovers will appreciate the little-known Parc de la Feyssine, which offers a pleasant contrast to the very orderly Tête d’Or Park in Lyon’s 6th district, as a sanctuary for wildlife. There, you will hear the birds sing and maybe even a beaver chewing on some wood.

To see Villeurbanne through new eyes, alone or as a family, take a look at the programme on offer at Le Rize. This cultural venue explores “working class, multi-ethnic and fraternal memory”through guided tours, lectures, screenings, meetings and more... 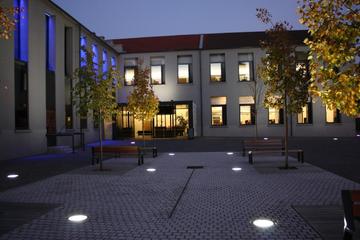 Wherever there is an industrial past, there are industrial wastelands to be reinvented. At the former industrial wasteland of Les Gratte-ciel, La Ferme des Artisans experiments with ideas for the city of tomorrow, such as urban kitchen gardens, shipping containers as workspaces for artisans, an anti-waste canteen and more. You can eat here, participate in workshops, take a gardening class and do some high-added-value shopping...

At La Rayonne, a “third place” located at L’Autre Soie, you can discover the Micro-Folie, a digital museum that provides access to the collections of a dozen major institutions 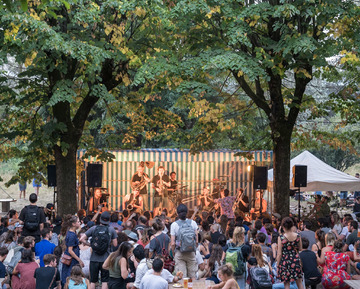 Created in 1920 by Marius Meunier-Rivière, a pork butcher by profession, the iconic cinema Le Zola was then called ‘Le Family’. In 1980, the Association Pour le Cinéma took over management of the cinema, much loved by the residents of Villeurbanne. In 2021, to celebrate its 40-year anniversary, Le Rize is exhibiting photographs and posters here. The exhibition is running until the 19th of December.

Where to get a good beer?

Try Villeurbanne’s first micro-brewery. Here is Brasserie de l’Amour, just a short walk from the Totem. Alix and Aymeric (see photo), childhood friends, offer a choice of four beers, all made on-site, at their eight taps. In the Gratte-Ciel neighbourhood, you will find the same passion for a tasty brew at Bieristan, with its excellent selection of local craft beers. 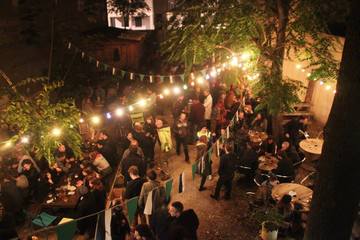 Since the 7th of September, Émilie Bonnanfant, who already shared her convivial, family-style cuisine at L’Appart des Frangines, is breathing new life into the TNP’s brasserie: L’Aparté. “This was a rather dour place, so I wanted to give it a real identity and soul. ” Mission accomplished. What could be better than a tasty, heart-warming blanquette of veal.

Where to bargain hunt?

There can be no better reason to set your morning alarm early on a weekend than a trip to Les Puces du Canal, France’s second largest flea market! Does the idea of rising early on a weekend horrify you? An alternative is offered by Les Phares Jaunes & Little Meubles, a garage-cum-flea market that sells vintage cars and motorcycles, as well as furniture and small decorative items. 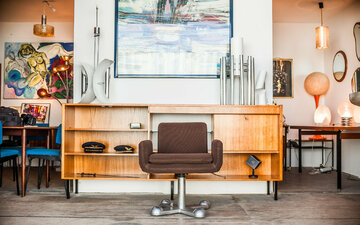